You’ve probably been to plenty of trade shows full of boring booths. Simple tables draped with plain fabric and dark backdrops, with maybe a company logo here and there? That’s not for you. Pop up displays at Austin conventions are a great way to make an impression and stand out from the crowd.

The first point to consider is whether to rent a display or buy a display. Consider your long-term plans: If you think you’ll be attending several trade shows over the years, buying your own pop up displays for Austin conventions could be a wise investment. But if you’re just starting out and not sure what your future looks like in terms of industry conventions, it may be a better idea to rent instead. Don’t worry that you’ll be stuck with boring stock displays, rental equipment is fully customizable and will look just as good as if you’d bought it.

Designing Pop Up Displays In Austin

But what should that display look like? First of all, it should be very clear that the display belongs to your company. It should be instantly recognizable, not generic and drab. Bright colors, your distinctive logo, and maybe some nice, shiny chrome will draw plenty of attention. Also, keep in mind that you only have a split second to get people’s attention. Anyone walking by should be able to see at a glance what your company is and what you do. So put the logo front and center. Try to use as few words as possible, since too much text will make people walk right on by instead of reading it. Use blue, black, or maybe red lettering – avoid drab, lifeless colors.

And don’t forget about lights! Good lighting is crucial to making your booth look its best. If you’re not sure what the lights at the convention center will be like, look into bringing your own. Just make sure to find out whether there will be electrical outlets near your assigned space so you know how to set up once you get there. 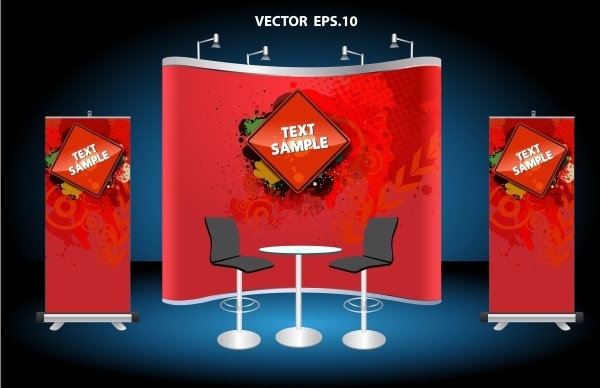 But what should go around that gorgeous, eye-catching pop up display? Austin trade shows are such a great sales opportunity, you don’t want to squander it with a careless arrangement. Keep it as open as possible and avoid putting a table across the front. You don’t want any barriers between you and the audience. If you do have a table and chairs, make them high so that you’re still at eye level with the people passing by. Avoid clutter and keep the space as clean and tidy as possible.

It also helps to use a gimmick of some sort to draw people in. One great tactic is a raffle. Put a jar at the front of your booth and ask people to drop in their business cards for a chance to win a prize, and this will also give you some great leads, too!

But don’t feel like you have to come up with a great display on your own! Xtreme Xhibits is here to take the design work off your hands. For great pop up displays in Austin, contact us at (512) 832-1921.

Bring Your Table Top Displays To Austin: Preparing For A Trade Show